Butterflies On Flowers, diaries, words and music from ‘68 Europe”

“Butterflies On Flowers, diaries, words and music from ‘68 Europe” Is a theatre performance that inspects the deep roots of the 68 in Europe, catching the essential and ephemeral aspects.

The theatre performance is the final result on a project developed on the 50th anniversary of the ‘68: it’s a year of analysis and reflections about the historical background of that peculiar time, and the performance investigates and puts it on scene. Everything started with an archival research (and on-field) in four symbolic countries for the 68 in Europe: Italy and France were the main focuses of the protest, Croatia (former Yugoslavia) and Portugal were symbols of that peripherical European geography drawn on the 60s maps after the “cold war” and the “iron curtain”.

The main characters of the show are common people: the boys and girls that live during the ‘68.

The case studies for the screenplay are the autobiographical sources, the diaries and memories of those who were 20, 30 or 40 in the 1960s.. The oral histories, the references of a vast and updated bibliographic research, the musical language, the audiovisual materials and the artistic expression complete the picture of the contents, analized and evoked to reconstruct the atmospheres of the time, with a view to a contemporary rereading.

The complexity of the topic and the different point of views were represented in a play that on stage uses three different kinds of language and wave them together: narration,  dramaturgy, musical exhibition. International artistic Professionals with a prestigious career will give voice to these languages.

“The performance is the result of the research work done by the Italian, Croatian, Portuguese archives partner of this project. Our reinterpretation is contemporary and is only one of the many - as Andra Merendelli, artistic director, says - “ a performance that narrates those times without any nostalgia or regrets (many artists were not even born) looking at an untold ‘68, because it was unknown, because till nowadays it was hiding in the pages of the autobiographical documents of the archives. That’s what we wanna tell, mostly to the new generations: the inestimable value created by the personal stories”.

Nicola Maranesi, author of the dramaturgy with Merendelli, says: “the ‘68 is an ephemeral but essential year. Ephemeral like a flapping that modifies the equilibrium up to create a hurricane on the other side of the planet. It’s ephemeral because it didn’t change the global political and economic order. It’s essential because it released all the energies that brought to the most important social conquest of the Twenty Century. 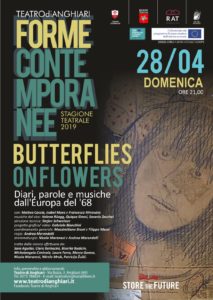 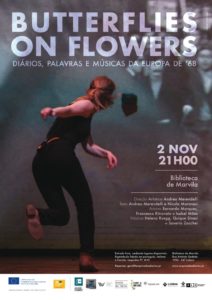